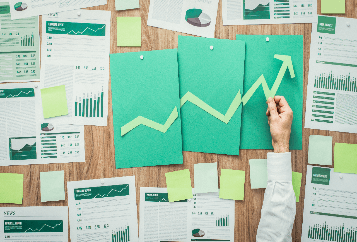 Everyone knows that practicing sustainability gives your business brownie points.But changing your operating systems and going green can be disruptive, costing you time and money. From a financial standpoint, is sustainability worth the effort?

The answer is a resounding yes—if you think in terms of long-term profits rather than tomorrow’s balance sheet. When you do that, the benefits are eye-opening.

Researchers for Project ROI1, a report developed by IO Consulting and Babson College with sponsors Verizon and Campbell Soup, combed through over 200 studies and found that corporate responsibility and sustainable practices can increase the market value of a company by up to 6 percent over a 15-year period. For companies that do business with NGOs or environmentally-friendly organizations, the figures are even more dramatic—their market value can exceed that of less-sustainable competitors by 40 to 80 percent.

The report also said that socially responsible companies can reduce their credit spread by 40 percent and reduce share price volatility by 2 to 10 percent.

A record of sustainability allows you to sell products at a premium and increase sales revenue by up to 20 percent. It strengthens brand loyalty by up to 60 percent and increases a company’s reputational value by 7 to 11 percent, the report said.

There’s a workforce case for sustainability, too. Staff turnover is 25 to 50 percent lower in companies that demonstrate corporate responsibility, saving you money on hiring costs, Project ROI found. And if you incorporate green building techniques to provide workers with fresher air and more light, they will be 8 to 11 percent more productive, according to a World Green Building Council report2.

A chief criticism of green building is its up-front costs. But over time, building green—or retrofitting existing buildings to be green—reduces operating costs, sometimes dramatically. Green buildings consume an average of 25 percent less energy and 11 percent less water than others, in addition to emitting 34 percent less greenhouse gases. As a result, they save 19 percent in maintenance costs, the U.S. Green Building Council says. Over time, energy savings accumulate—and so do the dollars in your wallet. According to a Department of Energy official,3 Energy Star-rated commercial buildings typically use 10 to 40 percent less energy than unrated buildings. Because of this, payback on green building projects can happen in as little as two to five years, and owners often can sell the property at a 6 to 10 percent premium.

If you can’t implement a large-scale program, even making a small change in energy efficiency can go a long way. An analysis4  of 30,000 commercial buildings in New York found that changing the temperature by just one degree could collectively save $145 million, or about 2 percent of the energy across all the buildings. Replacing old, inefficient windows could save $227 million, or about 4.5 percent of total energy costs.

Most commercial building owners borrow money to make energy-saving adjustments, and as we all know, borrowing isn’t easy with today’s tighter standards.

No matter what the building type, going green brings you tax advantages.

So who’s actually using sustainable business practices, and are they reaping tangible results?

Judge for yourself. Here are three examples:

Why leadership alignment is the cornerstone of successful digital transformation...